American Authors and Magic Giant wrapped up their electrifying Band of Brothers tour in New York City last week. The eclectic bands shared the stage current rising stars Public. Their latest single “Make You Mine” is killing it on social platforms like Tik Tok and fans were enjoying every second of it in person. Despite not knowing the words to every song, the crowd was actively engaging and full on mesmerized by the trio’s performance. As “Make You Mine” continues to blow, we’ll definitely be seeing more from the band.

Magic Giant and American Authors played a game of “plinko” with the crowd to determine which band would headline the final date of the tour. Magic Giant won and they took the stage for a collab with American Authors as their first song. Magic Giant have always had an electric stage presence that lifts fans up and pulls them in to a world of positivity and excitement. That energy made this tour that much more special. Their latest single Disaster Party was one of the high points of the night. In true Magic Giant fashion, frontman Austin Bisnow repeatedly jumped against the barricade and sang along with fans to make the performance feel more intimate despite being in a 1,000+ cap room. Both bands slowed down the set about halfway through for more calm moments. Magic Giant stood in the middle of the room and serenaded everyone for a sweet moment.

American Authors were in a hometown setting just miles away from their home of Bushwick. Their feel good songs perfectly complemented Magic Giant’s portion of the set. Two hours worth of crowd favorites and new music from both bands was a perfect Thursday night in NYC. View photos from the night below. Photos by Carol Simpson. 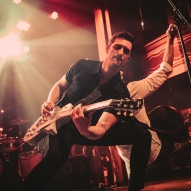 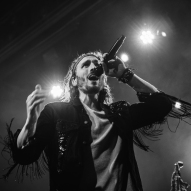