Hobo Johnson took over the internet when his performance of “Peach Scone” went viral. He has since been able to build a loyal fanbase, release a full length record, and travel around the U.S. playing festivals and headlining massive venues like Playstation Theater in NYC. It has been an unprecedented level of well-deserved success. His fall tour hit NYC on a cold, rainy day, but fans came out early to catch all three openers, Nate Curry, The Philharmonik, and Mom Jeans. Each eclectic and special in their own way. The balance of diversity from each act was so refreshing to se e. Despite the first two acts not having as large of a following, fans were still vibing along and enjoying every second of it. There was the definitive proof of the open and accepting fanbase Hobo Johnson has nurtured.

Mom Jeans was the outlier on the lineup, but it works so well. Their more emo/punk leaning set gave a small break from the hip-hop/R&B lineup. There were dedicated Mom Jeans fans moshing and singing along passionately to every single word. Hobo Johnson took the stage and performed what could be considered a blend of every genre the openers covered. His stunning production meticulously emphasized the bite of his spoken word. The crowd knew every single word and looked up at Johnson with so much love. One person in particular at the barricade was wiping away tears as they shouted along to “Romeo & Juliet”.

There’s something for everyone and Hobo Johnson is clearly a dedicated artist. The way he talks to his audience and the openers that are part of the tour all add to the experience. Something about the Hobo Johnson show makes it seem as if just about anything is possible.

View all the photos from the night below. All photos by Carol Simpson. 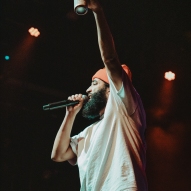