Billy Raffoul has been coming back to NYC periodically since 2017. He has headlined a handful of times and played venues like Rough Trade, Gramercy Theatre, and Irving Plaza. This time around he played the infamous Bowery Ballroom with Wrabel on the Happy People Sing Sad Songs Tour. This was the longest set he has played in NYC and his best set so far.

He exuded confidence and comfort on stage. It was just him, two guitars, and an array of pedals. Even without the backing band, it felt like a full performance and every emotion could be felt through the songs. He expressed gratitude in between each song and filled the remaining gaps with humor and stories about himself. Despite the full room, it felt like a personal show. His songs vary in lyrical content and offer a wide range of emotions that offer a peak into Billy’s mind and soul. The music was amplified by the simple production and backing lights that were timed thoughtfully with the songs.

The only way to get the full Billy Raffoul experience is to see him live for yourself. He’s one of the most promising singer-songwriters emerging at the moment and many are excitedly waiting for his full length record. Purchase tickets for the last two dates of the Happy People Sing Sad Songs Tour here. Photos by Carol Simpson. 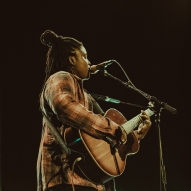 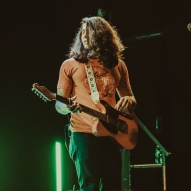