*repeat repeat hit Rough Trade in Brooklyn last night for an energetic show that became a dance party. Their addictive sound blends sounds from surf-rock, alt, and pop for a funky flare that makes them entirely unique. The crowd was visibly enamored by the band. Jared and Kristyn’s contrasting vocals add extra personality to their tunes and create harmonies that transform each song.

Their latest album Glazed has been extremely well received by fans and the song translate effortlessly into the live setting. Their were notable fan favorites in the set. Their hit single Girlfriend off their 2017 release Floral Canyon really set the crowd off into a full-blown dance party. View a video from their set below and check out the full gallery from the night below. You can listen to Glazed on all major platforms now. All photos by Carol Simpson. 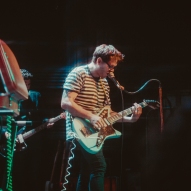