Last night April 28th, 2019 Jake Miller’s ‘Wait For You Tour’ took on Irving Plaza in NYC. The crowd filled the floor and lightly outlined the balcony. Everyone was buzzing for Jake to the hit the stage. Before Jake could come out his opener, Logan Henderson, had to grace the stage. Logan was in a boyband formally known as Big Time Rush. On that stage Logan brought all of the charisma and talent needed to captivate this audience. The crowd sang back the words to his fan favorite track, Bite My Tongue, and he even played an acapella version of a Big Time Rush song, Music Sounds Better, which caused an outburst of screams and elation from every member of the audience (including myself).

After Logan’s set was over it was time for Jake to hit the stage. The lights went out and the crowd visibly moved forward to be as close to Jake as the barricade and the other fans would allow. When Jake finally came out the vibe in the room was electric. The fans were screaming along to his opening song, Nikes. Throughout the night Jake told the crowd to jump and I could feel the floor beneath me move. The connection between him and his fans was very touching and sweet. He even took a fans phone on stage at one point when he saw she was facetiming a fan on who couldn’t make it to the show that night. All night his energy did not waiver. He came out with level 10 energy and it never dropped below that and the fans were right there with him. Jake Miller put on a high energy, interactive, and just overall great show. He went out on that stage and gave it his all and it did not go unnoticed.

Check out photos from Jake’s set below. View the rest of Jake Miller’s Wait for You tour dates here. All photos by Taylor Bernard. 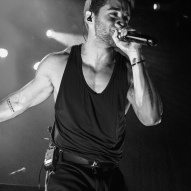 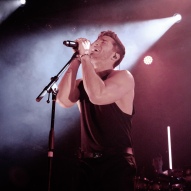