A humid and rainy spring day in NYC was about to be taken over by Bad Suns headlining tour. They’re opening act is a spunky and honest pop sensation from a small town in Wisconsin, Carlie Hanson. We were set to meet at a posh SoHo hotel. It was easy to feel a bit out of place in my flannel and beaten up docs, but then Carlie walked up with her flannel, backwards baseball cap, and chain linked around the waist of her jeans. She was officially the coolest person in the room.

We set up at a table tucked away. She was eager to get in her first meal of the day, french fries. Well before we got to talking about music, touring, the future, and horoscopes, it was evident that Carlie was as down to earth as any person could be. Her small town flare was well assimilated with her new L.A. lifestyle. She engages in a laid-back way that makes you feel like you’ve been friends were a while even if you’ve just met. This is clearly one of the reasons she has such a strong relationship with her dedicated and loyal fanbase. She accepts their snarky responses on social media, including demands to release her song Hazel, while also engaging with them constantly and being there for them as more than a performer. It wasn’t too long ago that she was on Twitter hoping to gain an ounce of access to her favorite artists. “Especially on Twitter I used to have three fan accounts. I totally understand them. I see myself in them. It’s a good relationship” she expressed during our lunch.

Translating that relationship to the stage, she has the organized chaotic energy of a punk rockstar while engaging with the crowd like a seasoned pop veteran. She jokingly says that she could perform naked and feel 100% confident, but it’s important to note that she has only be performing for about a year. “I’ve been performing a lot lately so I’m still getting used to it, but it’s still so surreal. I was the fan that was in the crowd looking up at the artist singing their words back to them and now it’s reversed so it’s really strange. It’s like everything I ever dreamed of. It’s so fucking cool. It’s super weird. I never thought this would actually happen.“

The youth is taking over the world. It’s cool because we have a lot we want to say and the more young people are doing this the more people are going to listen to us.

Not one to let her age hold her back, Carlie’s youth has allowed her to go from fan to performer in a short amount of time. Her influences range from total pop stars like Justin Bieber to Post Malone, Frank Ocean, and The 1975. Her eclectic taste in music has allowed her to tailor make her sound that derives inspiration from rock, pop, hip-hop, R&B,  and honestly anything else Hanson’s heart desires.

So how does this happen, especially in such a remarkably short amount of time? Her first three singles were released independently and have since garnered millions of streams on all platforms. One has even earned the support of Taylor Swift. Her explosive start led to major label attention and helped her secure a deal. Pretty soon she was touring with performers like Troye Sivan and Yungblud. Now that she’s gearing up to release her first EP this summer, there has to be some pressure building up to that, right? Her calm and cool confidence has her fully prepared to launch this body of work. “I’m pretty confident just because I think my music has gotten even better since then. I’ve been growing and because I’ve been becoming more mature I think my music has. It hasn’t even been over a year. It’s weird because I have been growing so much in this time the music is even better than it has been. I am so excited.”

Her excitement is contagious and everyone is eagerly waiting for what some may consider to be one of the most anticipated albums of the summer from an up and coming act. Carlie’s taste and sound will culminate into a 7 song EP that is comprised of mostly unreleased music. She gave us some hints about the record. “It is more rock. Obviously not like metal, but there’s more guitar elements, more real sounding drums. I don’t want to compare myself to anyone, but it’s kind of like newer sounding Avril Lavigne. It’s like Avril Lavigne but throw some pop and hip hop in there. Also, kind of like Post Malone too. I definitely found this new sound that is incorporated into the EP. I think there’s going to be seven songs total on the EP. I think they’ll all be unreleased except for one.”

With all of that excitement and personal growth, Carlie still has a lifeline back at home in Wisconsin. “All my friends are going off to college and have jobs. I feel somewhat distant from them, but then I look back and think there’s nothing in the world I would rather be doing.” Her appreciation for everything that has been happening is evident. That genuine nature and honesty has become a standard ingredient in her songwriting. Her songs reflect real emotions, situations, and fears. 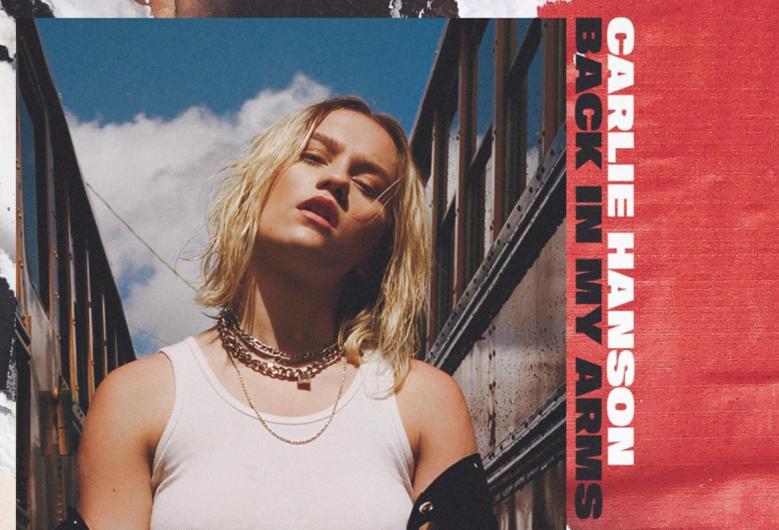 Back In My Arms is her latest single that was just released this Friday. The song taps into an important part of Carlie’s life when she was in her first relationship with a woman . The music video juxtaposes the lyrical content with a fun visual for the track that includes a family mission , an armored truck, and bailing someone out of prison. We won’t give away all of the details of the video though.

It’s so evident that Carlie is the real deal. Just as she put it herself, this is a primetime for young artists to tear up the charts. She is rapidly catching up to the likes of Khalid, Yungblud, and Billie Eilish. Keep up with Carlie Hanson on Twitter and Instagram and listen to Back In My Arms here.