Their debut record has been out in the world for less than a month, but Songs For The Sleepless is a stunning debut from Get Married. Their last EP, Into The Cosmos, was released in 2016 and the band and their songs have evolved since then. The band is currently promoting the record while traveling across the U.S. on tour with Tiny Stills. 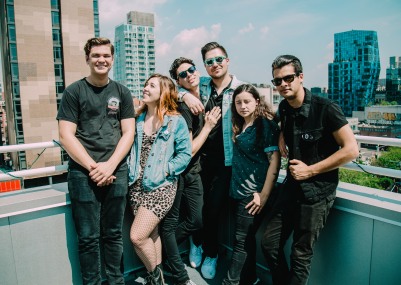 Songs For The Sleepless was recorded in two different places. Half was done in Fremont, CA at Panda Studios with Ryan Ellery and the other half was done at Ryan’s dad’s house. Working on the album in two places certainly didn’t affect the cohesiveness or quality of the record. As a strong representation of Get Married’s sound, lead singer and guitarist Jake says it’s “relieving” to finally have the record out.

A great deal of work went into the album considering most of the songs were written during the Into The Cosmos era of the band. A little bit of fine tuning and the addition of their bass player, Kayla, put Get Married in the right place to perfect these songs. Randy says, “I feel like half of the songs we had since our first EP and we were just waiting to craft them the way we wanted them to be...and then after playing the same song for three years you get something completely different than how you started. That’s how a lot of the songs are, but the other half came really quickly after Into The Cosmos, our second EP, came out. Then Kayla joined the band and the chemistry was just perfect and we were firing all cylinders.”

With a full length record out, the next logical move is to hit the road. Luckily for them they have an established bond with Tiny Stills and it was a no-brainer to hit the road again for a full U.S. tour. Despite the sonic differences, Get Married and Tiny Stills are collaborating in the best way possible. Get Married has been Kailynn’s backing band on this tour and Kailynn has joined Get Married on stage each night playing keys. Genre is not meant to be a restricting concept and this tour has proven that mixed genre bills are more exciting for bands and fans alike. Rhythm guitarist, Tarif expressed that diverse lineups are partially enhanced by the popularity of streaming. “I think nowadays with streaming and everything, everybody can listen to so much different ty

pe of music. I really don’t know anyone who listens to just this kind or this kind. Especially on tour, having something this diverse helps us because we can speak to more people. If you don’t like us then you’ll like this person or you’ll like both.“

They’re tour wraps up on September 15th in San Jose, CA, but Get Married doesn’t plan on slowing down once they’re back. They’ll have a busy few weeks of more shows including playing FEST in FL, opening for Rozwell Kid, and a couple of other gigs. Despite going back home to work day jobs, like most bands do nowadays, they’re already itching to spend more time off writing new music and touring.